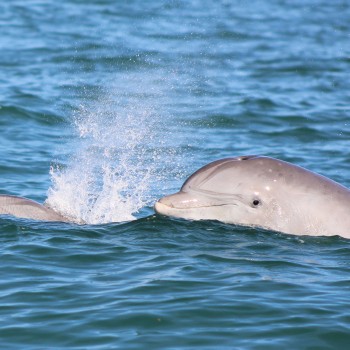 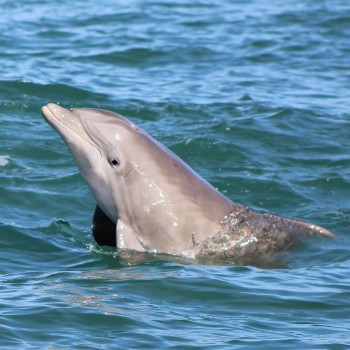 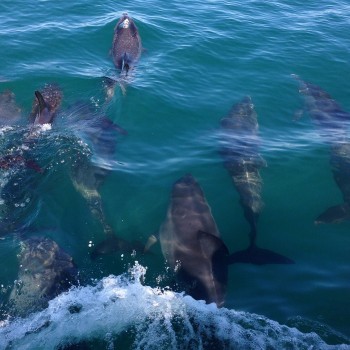 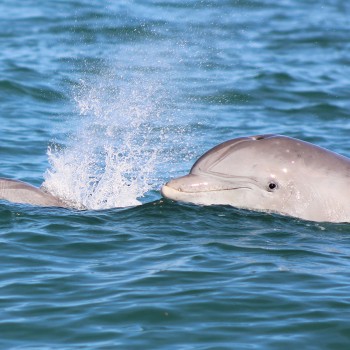 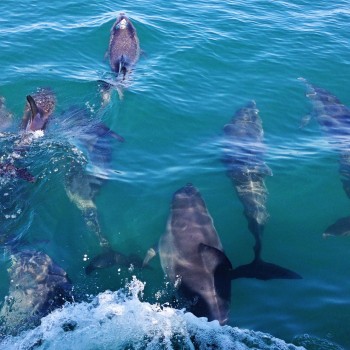 “Enjoying my day off out on the boat cruising in the banana river where I look back to see a light to slate gray dorsal fin gliding through our wake. Then all of a sudden it’s like I’m at sea world but even better. The acrobatic bottlenose dolphin starts to jump out of the water. Nothing puts a bigger grin on my face than to be able to see how happy and how much the dolphins love to ride boat wakes!”

Worldwide in warm temperate waters, subtropical, and tropical is where you will typically find bottlenosed dolphins. They’re found along coastlines, in bays, estuarine, harbors, and open shorelines. The Dolphins enjoy waters with the surface temperatures between 90 and 50 degrees. Bottlenosed dolphins can be found anywhere but polar waters. Inshore dolphins come up twice per minute to take breaths while deep water dolphins will come to the surface every 1 to 2 minutes and take breaths. However, without taking a breath the bottlenose dolphins have dove deep enough to go 4.5 minutes.

Bottlenose dolphins have very strong and healthy bodies. Their dorsal surface color is light to a dark gray, fading to a white and pale gray color under their jaw and belly. The dolphin’s skin is smooth and rubbery. They also do not have any hair or sweat glands. Just like our skin, the dolphins skin flakes constantly, but sheds nine times faster than humans skin. Every two hours their outermost skin layer may be replaced. This ensures a smooth body surface for the dolphins to help reduce drag and increase their swimming. The bottlenosed dolphin gets their name “bottlenose” from their short and stubby beaks, which generally contains about 80-100 cone shaped teeth. Their teeth are designed to grasp slippery prey and not for chewing. Each tooth measures around 1 cm and when dolphins lose teeth they’re not replaced. 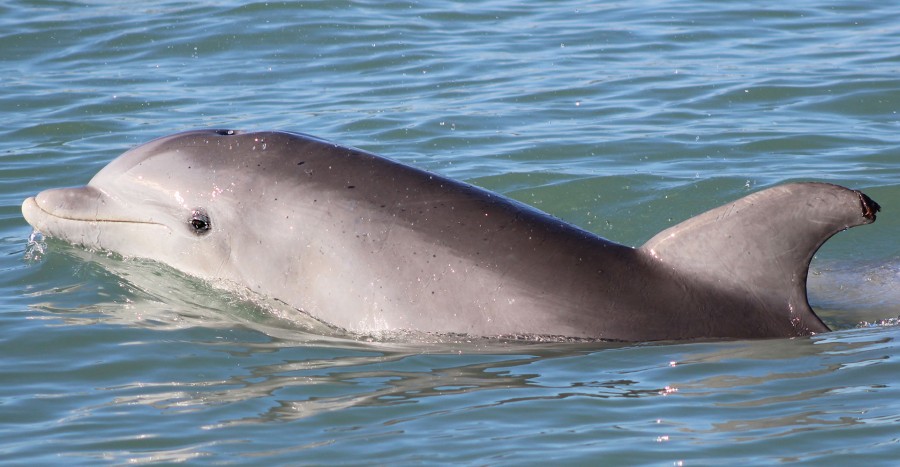 Covered by a muscular flap, the bottlenose dolphin has a single hole located on top of their head called a blowhole. The muscular flap is water tight seal. They use their blowhole to breathe through when they’re on the surface.

Their top and most common predator are larger sharks such as bull and tiger sharks. They prey more on the calves and smaller dolphins. Occasionally killer whales will prey upon dolphins. Humans also play a threat to the bottlenose dolphins by getting accidentally caught in gill nets, shrimp trawls, or getting tangled in discarded monofilament line. In some parts of the world, dolphins are still hunted.

The bottlenose dolphin’s lifespan is approximately 20 years on average but some studies have shown dolphins live up to their 40’s and 50’s. In the first two years, some suffer mortalities from adverse climate, predators, and diseases.

The bottlenose dolphins swim at speeds of about 3-7 MPH.

The bottlenose dolphins diet includes a wide variety of fish, squid, and crustaceans. Each day the adult dolphins eat about 4-6% of their body weight and nursing mothers eat about 8%. For a rapid digestion, a dolphin’s stomach is compartmentalized. Bottlenose dolphins shake or rub their prey on the ocean floor to break off pieces because dolphins do not chew their food. When hunting and catching fish dolphins often act jointly. The Dolphins have several different hunting techniques. A group of dolphins in open waters will circle a large school of fish and herd them into a smaller school. Then taking turns, they’ll charge through the school and feed. Towards the surface of the ocean, the dolphins have a hunting technique called “pinwheeling”. With one pectoral flipper raised high, they will roll on their side forming a circle around a school of fish. Then using their tail rapidly they force the fish tighter together and reach in to grab a quick meal then they leave. Another hunting approach the dolphins use is called “strand feeding”. They trap their prey in shallow waters by herding the fish against shorelines, mud banks, and sandbars for an easy catch.

A dolphins sexual maturity age varies in different geographical locations. Here in Florida, female dolphins reach sexually maturity around 5 to 12 years while males mature sexually at about 10 to 13 years. The female dolphins are pregnant for 12 months and give birth to one calve. April and August are peak calving times for dolphins in Florida. The bottlenose dolphins reproduce every 3 to 6 years. Head-first deliveries can happen but most deliveries are tail-first. The calves are born in the water and during delivery the umbilical cord snaps. Their dorsal fin and tail flukes lack firmness and are flexible in the first few days after birth but will stiffen gradually. In their abdominal mammary slits, female dolphins have nipples concealed which are where the calf nurses. Through out the day and night, a calf can nurse 3 to 8 times per hour with each nursing period lasting 5-10 seconds. A calf may nurse up to 18 months. Their teeth start to come in around 3 to 4 months and they begin to take a few fish. Typically a calf will stay with its mother for 3 to 6 years.

CHECK OUT THIS VIDEO INTERACTING WITH DOLPHINS ON A TOUR!