When I think of a pelican, the first thing that comes to my mind is a pterodactyl! A long over-sized bill and wide wingspan gliding through the salty air along the beaches and rivers. On the East Coast of Florida, you will see a lot of the brown pelicans also known as Pelecanus occidentalis. Although the brown pelican may seem to be a large sized bird they’re actually the smallest out of the seven species of pelicans. They usually weigh between four and eleven pounds with the males weighing 15-20% more than the females. On average their wingspan is 78 inches and their bill ranges anywhere from 10-15 inches in length. Have you ever noticed some brown pelicans really do refer to their name and are brown but others are gray with a white neck and yellow head? That’s because all brown feathered Pelicans are actually juveniles.

THE PELICAN FITS MORE IN HIS MOUTH THAN HIS BELLY CAN, I DONT KNOW HOW THE HECK HE CAN!

Brown pelicans are often spotted on pilings, piers, docks, behind filet stations, or following close behind boats that are headed in looking for some handouts. Anything they can get their feathers on! Three gallons of water is how much the pelican’s gular pouch is able to hold which is three times more than their stomach can hold! Primarily feeding on fish the brown pelicans are carnivores. They also eat small marine invertebrates such as crab and lobsters. Brown pelicans are the only pelicans that dive and can spot fish over the ocean as high as 65 feet! When they go in for a dive head first they tuck and twist to the left to protect their esophagus and trachea from the impact. To trap the fish while plunging into the water the pelican’s throat pouch expand and also fills up with almost three gallons of water. 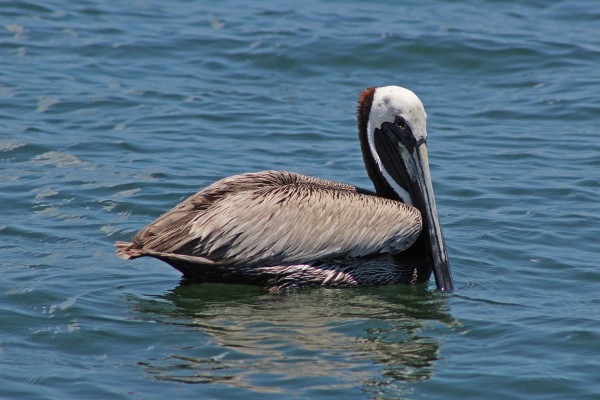 The lifespan of brown pelicans can be long. In fact, the record for the oldest individual in the wild was 48 years old! Nestlings will often directly peck their younger siblings on the head leading to death. Sometimes they will also push them out of the nest. That’s a couple of the reasons why about 30% of brown pelicans survive past the first year. Surviving more than 10 years drops down to less than 2%!

The brown pelicans are coastal birds and always within 20 miles of the shore. When they’re not breeding they like warm coastal ocean water or the locks where the river meets the ocean. Offshore at night is where the pelicans roost and then during the day they loaf. Some loafing sites consists of pilings, jetties, sandbars, breakwaters, and islands. On the Atlantic and Gulf coast, the brown pelicans move to small predator-free islands to breed. Natural estuarine islands, dredge-spoil islands or barrier islands.

Hunting for their eggs, meat, and feathers us humans are predators to the pelicans. Fish crows also prey on their eggs as well as other birds. When they can raccoons, feral cats, and feral dogs will eat hatchlings. Red imported fire ants are a threat to the hatchlings too. The fire ants have infested nests killing 60% of baby chicks! Predation on adult brown pelicans is rare but occasionally while floating on the water they’re attacked by sharks.

In Florida, on the Atlantic coast, the brown pelicans lay eggs between December to June. On average the brown pelicans mate between the ages of 3 to 4. After mating, the pair begins to build their nest either on the ground or in trees. The male pelican brings all the building materials to the nest while the female builds the nest. Per season the female lays between 1 to 4 eggs. On average the adult brown pelican lays three eggs, while the juvenile pelicans under the age of three years old lay no more than two eggs. The incubation period typically lasts a whole month and about 30% of the eggs laid that season will not hatch. Pelicans incubate their eggs by practically standing on them using the skin of their feet to keep the eggs warm. Also, both parents are responsible for incubating the eggs and keeping predators away. On the tip of the chicks beak, they have something called an “egg-tooth” which they use to break open the shell. The egg-tooth actually disappears within 10 days after hatching. It usually takes 31 hours for the chicks to fully hatch. On average the brown pelican chicks weigh about 74 grams. Covered in fluff, newly hatched chicks have pinkish gray skin. By day 30 juvenile feathers start to appear which they keep until age 3 when they start to develop adult feathers. At 11 weeks their wing feathers are large enough for flight and by 3 months they’re considered independent.

Brown pelicans communicate by chemical signals, acoustically, visual cues, and touch. The adult pelicans make a low “hrraa-hrraa” sound while swaying their heads. This noise is used mostly for two reasons, protecting their nest and for finding a mate. Bowing to each other is used as a defense and non-aggressive behaviors include raising their bill horizontally, swinging their head side to side, or spreading their wings outward. Baby chicks communicate by making noise as well. A few days before hatching, peeps from the eggs can already be heard. While their parents are searching for food the nestlings release a high pitch call to them.

WATCH US SAVE A PELICAN ON A TOUR!