The green sea turtle- One of Florida's endangered reptiles.

Oceans worldwide in tropical and subtropical is where green sea turtles call home. The green sea turtles get their name from the greenish color of their skin and not from the color of their shell. Depending on its habitat the turtle’s shell is usually brown or olive. Currently, scientists are debating whether the green sea turtles are separate species or subspecies because there are two different types. The Atlantic green turtles are found throughout the Atlantic Ocean in North America and Europe. Then there are the Eastern Pacific green turtles which are found from Alaska to Chili in coastal waters.

The green sea turtle has a smooth and heart shaped shell, which is also called a carapace. The carapace can be a blend of several different colors including gray, olive, black, or brown. The plastron, which is the underside of their shell, is yellow. Green sea turtles have brown and yellow markings on their head and they cannot retract their head into their shell like many other turtle species can. They have paddle like flippers that allow them to move quickly and gracefully through the water. The green sea turtles can reach speeds up to 35 MPH! They’re cold blooded and can hold their breath for hours in one sitting. Different water temperatures affect how long they can hold their breath. For example, they can hold their breath longer in colder water. 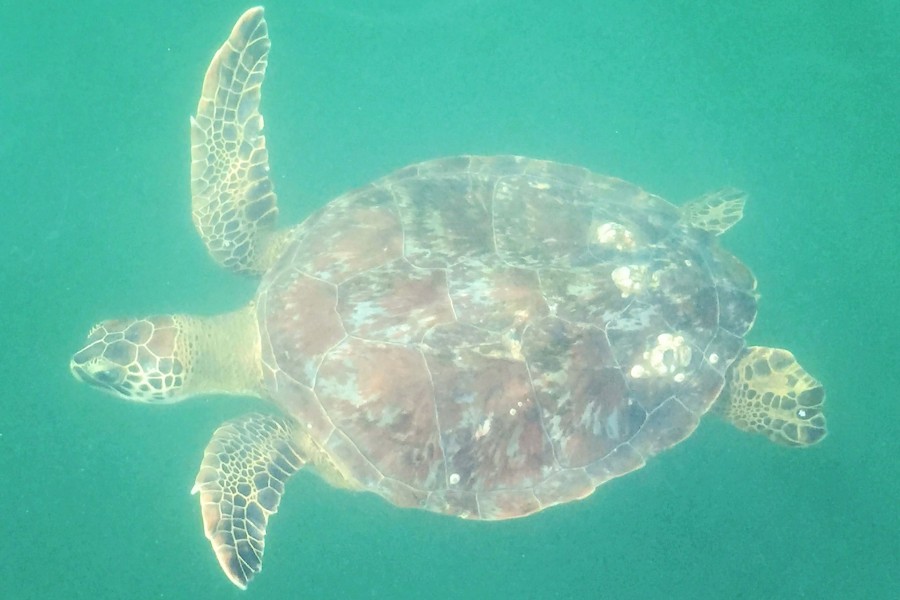 Green sea turtles live long lives! To reach sexual maturity, it takes at least 20 – 50 years. The average life span in the wild for the green sea turtles is 80 – 100 years or longer!

Adult green sea turtles are herbivores and the juvenile turtles are omnivores. The adults feed on algae and seagrasses. Their jaw has a jagged edge that helps them chew their primary food easily. Juvenile green turtles also eat plants and a wide variety of animal life including crustaceans, insects, worms, jellyfish, and sponges.

Just like other sea turtles, green sea turtles migrate long distance from feeding sites to nesting grounds. Every two to four years mating occurs and usually takes place close to shore in shallow waters. The breeding season starts towards the end of spring and early summer. Female green sea turtles only breed every 3-4 years while the adult males can breed every year. To find the perfect nesting ground, the female turtle leaves the sea and chooses an area on the beach. Most of the time they’ll choose the same beach used by their mothers. Then using their flippers, the female turtle will dig a pit in the sand and fill it with a clutch of 75-200 eggs. After laying the eggs they cover the pit and return to sea leaving her eggs to fend for themselves. I take about two months for the eggs to hatch. Making the journey from nest to sea is the most dangerous time of a green sea turtles life. The newly hatched sea turtles have several predators, including sea gulls, crabs, and other mammals that love to feast on young turtles. A bigger threat to them is actually light pollution near beach nesting sites. Lights from homes, buildings, and restaurants along the beaches confuse the hatchlings and they’ll crawl towards the lights instead of the ocean.

Here’s a picture of Captain Dustin interacting with a green sea turtle!